Urban Observatory Viewing the Emergent City and Its People

a horticulture competition featuring over 40 living plant sculptures is exhibiting at the montreal botanical gardens in canada. ‘mosaicultures internationales montréal 2013’ displays two and three dimensional constructions, cultivated by 200 international horticultural artists originating from more than 20 countries, making it the largest eco-responsible event to come to quebec. mosaiculture is a multifaceted discipline, drawing on a range of craftsmanship and knowledge — sculpture for the framework, painting for chroma, and ecology, for the understanding of the maintenance of the floral medium. this year’s event challenged the artists around the theme ‘land of hope’ as it reflects their own culture, drawing influences from icons of peace and promise for a environmentally sound world. collectively, over three million colorful flowers and plants were used in the environmental designs, creating a colossal body of living vibrant art.
mosaicultures internationales montréal 2013
video courtesy of mosaicultures internationales montréal 2013

‘a dove for peace’ presented by hiroshima, japan

the making of the horticulture sculptures

Collateral Landscape – seeing it as it is!

An architect by training, Ottomanelli looks to the inhabited landscapes as a register of human activity, consisting of both destruction and reconstruction. The representation of the landscape is critical but not judgmental; conflict is expressed not through bullet-holes and bomb craters but through images of brand-new gated communities and pristine parliamentary buildings. These places are not the theatre in which the plot unfolds but rather a cast of actors in themselves. The position of the images is not fixed and will change throughout the duration of the exhibition. Selected photographs are accompanied by descriptions of the landscapes, hand-written by the local guides who accompanied Ottomanelli during his reconnaissances.Joseph Grima (@joseph_grima)

From Land8 by Shavawn Coleman

When most people think of Italy, their first thoughts are of the Colosseum, the Vatican, or Venice’s Grand Canal. Not many imagine a colorful, imaginative, unique sculpture garden tucked away in Tuscany.

My first impression upon arriving was just WOW! This was not like the typical gardens I had been visiting all summer. I was engulfed with bright colors, intricate mosaic work, and enormous sculptures. The winding paths kept me intrigued as to what might be around the next corner. I was in Niki de Saint Phalle’s dream!

The Giardino dei Tarocchi (Tarot Card Garden) is about 2 hours north of Rome. Being based on Tarot Cards, this isn’t your typical Italian garden. The designer, Niki de Saint Phalle started the layout and design of the garden in 1978 and opened it to the public in 1998. De Saint Phalle was a French sculptor best known for her large, voluptuous, and colorful statues exhibited all over the world.  She worked and lived on the site of the Tarot Card Garden until her until her death in 2002.

One of the first sculptures to capture your attention is based on the High Priestess Card. This work represents feminine intuition, which, according to the tarot, is one of the ‘keys’ to wisdom. On top of the High Priestess is the Magician. According to de Saint Phalle’s website, “The magician is the card of God the creator of the universe. It is he that created the marvelous joke of our paradoxical world. It is the card of active intelligence, pure light, pure energy, mischief and creation” (http://www.nikidesaintphalle.com/). 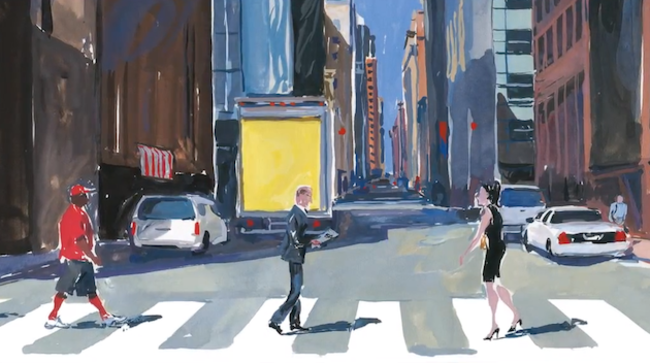 New York City is the  muse for Louis Vuitton’s 2013 Travel Book series. The fashion brand enlisted Paris-based fashion illustrator, artist, painter and cultural writer, Jean Philippe Delhomme to offer a visual interpretation of the things that he loves about the city. Jean Philippe sought out to draw inspiration from New York’s  strong lights, shadows and extreme visual cues. His vision  for the illustrations was to visually communicate his passion for New York, unfiltered by any commentary.

In the artist’s own words, the project “offers a new and contemporary vision of travel, both real and virtual. Intended as an art of work in themselves, they each depict each destination  through the eyes of an artists in 100-200 exclusive drawings.”

This is an interesting example of a fashion brand taking an unconventionally artistic route into the travel sector. 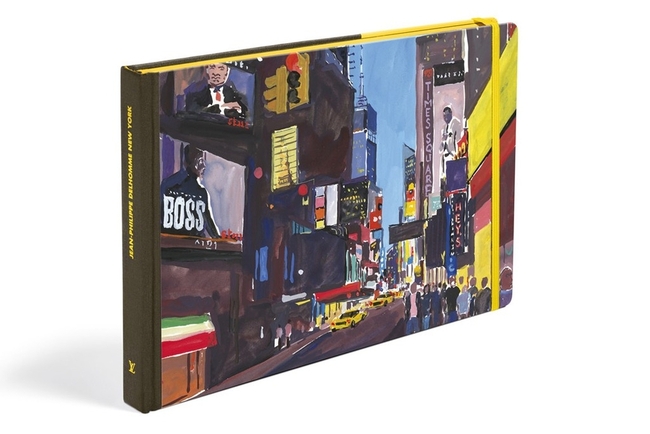 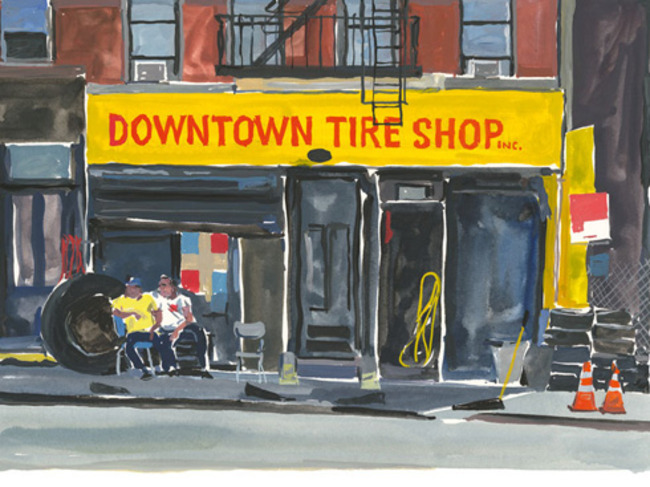 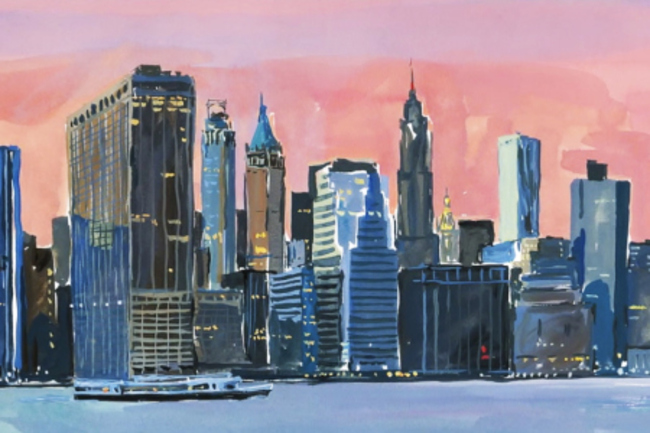 Painting over the Present—

While these are attractive pictures in themselves , to me they represent another variant of “`Township Porn” that takes a particular view of South African life and uses it to become an emblem for the artist. As far as it seems to me from the few pictures here – those are hardly representative life in South African cities – there are many diverse views possible – both ‘better” and “worse”. I am in no way denying that South African cities are unjust and unequal – but I believe there is a middle ground emerging that is more variegated adn more real thatn thee pictures show.  From domus

I began this project 16 years after the end of apartheid rule in South Africa. As a photographer, I have explored the transformation of society and aspects of change as a general theme. In this particular essay I have focused on the environments occupied by some of South Africa’s poorest people. It would seem that although wealth and power have shifted hands since the first democratic elections in 1994, many of the benefits of these shifts have failed to filter down to the grassroots level.

The photographs focus on the interiors and exteriors of people’s homes. They are intentionally static in their composition in order to accentuate the minutiae of the occupants’ day-to-day dwelling places.

The bright colours captured in these photographs act as visual trinkets to momentarily distract the viewer from deeper harsh realities. However, although they encourage denial, they are also suggestive of resilience, hope and, sense of humanity that remains in these poverty-stricken communities.

These photographs were taken in small towns, townships and cities throughout South Africa. It has been surprising to find that although the areas differ in many ways, there are almost always individuals who seemingly refuse to be subsumed into the starkness that surrounds them.Graeme Williams

“I’ve seen Kelly Ripa there. Two little kids were playing with Legos on the treadmill next to her, and there was nobody else.” — NYT

If you thought China or Dubai are the only places where you enter a multi million dollar condominium just purchased for that unruly son / daughter or a mistress, or laundering money.., hold on… Why is that all sold out prime luxury condo building in New York only occupied 10% with concierge, room service and all?

From [polis]  by Jordi Sanchez-Cuenca

Mexico City is a giant laboratory of urban morphology. Its 20 million residents live in neighborhoods based on a wide spectrum of plans. Here are some examples.

The colonial center (above) was built on the foundations of Tenochtitlan, capital of the Aztec empire. The old city was on an island in Lake Texcoco. The lake was drained to prevent flooding as the city expanded.

Geometric plans dominate throughout Mexico City. The Federal neighborhood (above) evokes the radiating streets of Palmanova, a town designed by Vicenzo Scamozzi in Renaissance Italy.

Nezahualcóyotl (above), or Ciudad Neza, is a municipality of one million people within Mexico City’s metropolitan area. Its street plans follow a standardized layout — public amenities with green space confined within mega-blocks.

The rich and famous tend to prefer organic forms, and tend not to economize on water for their gardens. In the wealthy neighborhood of Jardines del Pedregal (above), some houses have heliports.

Planners chose a repetitive style for their unfortunate clients in Fuentes de Aragón (above). This neighborhood is part of Ecatepec de Morelos (below), which — like Ciudad Neza — is a municipality within Greater Mexico City. The entire city doesn’t follow an extreme grid, but neighborhoods like Fuentes de Aragón are common.

In recent years, Mexico’s federal government has invested substantially in housing for the poor. Its programs, such as those beautifully photographed by Livia Corona, have rehoused over two million families in massive developments like Los Héroes Tecámac (below) in Ecatepec de Morelos.

Modernist planning is still alive in Mexico, where planners appear to have substantial power in society. The challenge of resettling so many families in so few years has been solved through standardization. Many new settlements resemble enlarged microchips.

Other developments — like Geovillas Santa Bárbara (above) — have curved streets and more diverse layouts, but they are usually for higher-income populations.

The social dynamics behind urban growth in low-income areas are complex, and self-made construction is the rule. Very few public or private initiatives strike a balance between top-down and bottom-up housing development. Instead there are extreme disparities between the two.

Street markets under red canopies show up frequently in satellite images of Mexico City. The market above is in Xico, another municipality within the metropolitan area.

Xico is bordered by Chalco Lake (above) and the Santa Catarina Mountains (below). Here, urban development takes place without much formal planning. Green space and public amenities seem a luxury.

There is a real need for a new approach to urban development — one that empowers informal communities without imposing insensitive planning from above, addressing the roots of urban poverty instead of formalizing it.